Celebrate the 2022 holiday season in the glow of CBS’ expansive lineup of festive original programming, on the CBS Television Network, and available to stream live and on demand on Paramount+.  The full list of new CBS Originals and returning favorites for the holidays follows:

National Christmas Tree Lighting: Celebrating 100 Years — 7 p.m. CT
Light up the holidays with this beloved American tradition in its 100th year, presented by the National Park Service and National Park Foundation. Tune in to celebrate the official tree lighting on the Ellipse in President’s Park in Washington, D.C., and experience an all-star lineup of musical performances with the whole family from the comfort of your home.

Must Love Christmas — 8 p.m.
A renowned romance novelist (Liza Lapira of The Equalizer) famous for her Christmas-themed books finds herself snowbound in the charming town of Cranberry Falls. There, she unexpectedly becomes involved in a love triangle with her childhood crush (Nathan Witte) and a reporter (Neal Bledsoe) determined to interview her to save his dying magazine.

A Special One-Hour Holiday Episode Of “Ghosts’ — 7 p.m. CT
When Jay’s (Utkarsh Ambudkar) sister Bela (Punam Patel) returns to Woodstone Mansion for a holiday visit and brings a platonic male friend, Samantha (Rose McIver) – inspired by the holiday rom-coms she adores – makes it her mission to spark a holiday romance between them. Meanwhile, the ghosts have conjured up a very different holiday plan – also involving Bela.

Reindeer In Here — 7 p.m. CT
Celebrate the holiday season with a new one-hour animated special filled with joy and magic for the whole family. This is a heartwarming story of how Blizzard (Blizz), a young reindeer living at the North Pole who has an unusual trait – one antler that is significantly smaller than the other – and his unique group of friends band together to save the future of Christmas. In doing so, they unknowingly create a magical holiday tradition like none other.

The Greatest At-Home Videos — 8 p.m.
‘Tis the season to share videos, and Cedric the Entertainer is serving up a double dose of holiday cheer with two of his greatest #athomevideos specials. The Greatest At Home Thanksgiving Videos delivers a full hour of entertaining and heartfelt videos Cedric has found on Instagram, YouTube, and TikTok. It’s bound to have viewers feeling warm and fuzzy as they begin the holiday season.

When Christmas Was Young — 7:30 p.m.
A headstrong music manager (Tyler Hilton) in desperate need of a hit song for his last remaining client finds himself falling for a gifted singer-songwriter (Karen David) with abandoned dreams of making it big, as he attempts to secure the rights to a Christmas song she wrote years ago. Features original music by Sheryl Crow, who also executive produces.

The Price Is Right At Night — 7 p.m. CT
Drew Carey hosts a special holly-jolly-themed primetime episode where families come on down to the iconic game show stage and play for festive prizes. Plus, the show highlights pet adoption when they showcase animals looking for their fur-ever homes this holiday season.

The 24th Annual A Home For The Holidays At The Grove — 7 p.m. CT
The entertainment special features uplifting stories of adoption from foster care and raises awareness of this important social issue. The inspirational stories of these American families are enhanced with performances by some of today’s top artists (to be announced shortly), performing from The Grove in Los Angeles.

Christmas Takes Flight — 8 p.m.
A holiday battle of wills between pilot Jenny Beckett (Katie Lowes) and Matt Connor (Evan Williams), a number-crunching CEO who purchases Jenny’s family-owned, regional airline. Matt’s cost-cutting initiatives threaten Christmas when he cancels the airline’s annual holiday charitable benefit for underserved children. Determined to show Matt that the sweetest things in life are worth any price, Jenny rallies the community to help save the event and unexpectedly finds herself falling for the magnate in the process.

The Gift: Kindness Goes Viral With Steve Hartman — 9 p.m.
In a one-hour CBS News special, Hartman examines how one simple act of kindness can create a ripple effect that causes real, positive change. Hartman meets an MIT professor as she works on a formula to answer the question: What does it take for an act of kindness to spread? It’s all about ordinary people committing extraordinary acts and changing lives far beyond their own communities. The impact will amaze you.

We want to see how you are celebrating the holidays. From Halloween to Thanksgiving, Christmas and New Years, send us photos of your celebrations. Email photos to ushare@keloland.com and we’ll add them to our gallery. Please include your name, location and a brief description.

The story behind the Sioux Falls Christmas Light …

Parade of Trees underway at SD School of Mines

When to mail packages for on-time holiday delivery

Bringing a community together with Christmas trees

Get in the holiday spirit with these events

When will NORAD start tracking Santa?

Watch the 2022 Parade of Lights

DTSF Parade of Lights: Map and what you need to know

7 things to know if you’re a Thanksgiving guest

Holiday basics: How to have safe, sane Thanksgiving

Shrink the cost of jewelry with this DIY

A decor update with a throwback twist

Take your game nights outside with this DIY greenhouse

DIY bird seed ornaments to feed birds in the winter

View All Do It Yourself

Pride of the Dakotas to NYC

Pride of the Dakotas marches in New York

Jackrabbits in NYC ahead of parade performance

Pride of the Dakotas selected for Macy’s Parade

View All Pride of the Dakotas 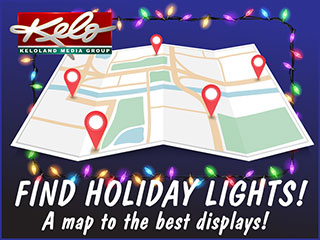 Win Tickets To The Summit League!