by: Joel Feder - The Car Connection

With a name like Woodland Special Edition, it might seem as if Toyota jacked up its Sienna minivan with a lift kit and knobby tires.

The 2022 Toyota Sienna Woodland adds all-wheel drive and a tow hitch receiver as standard, and Toyota increased the ride height 0.6 inches on its hybrid minivan, but the enhancements create their own set of problems.

While the 2022 Toyota Sienna has a TCC Rating of 7.3 out of 10, that rating dropped for the 2023 Sienna to 6.7 out of 10 due to a troubling three-star driver front-impact score from the NHTSA and TCC’s revised fuel economy requirements for 2023 models.

The Sienna lineup bests the 2023 Honda Odyssey thanks to exceptional fuel economy, available all-wheel drive, and decent towing capability. But the Sienna lacks abundant power, it’s not particularly pretty, and its infotainment system already feels a generation behind. The Woodland Special Edition does almost nothing to right these wrongs and instead seems to be a contradictory marketing ploy.

After spending a week hauling the family around town, driving errands, and taking a road trip to family camp, here’s where the 2022 Toyota Sienna Woodland Special Edition hit and missed. 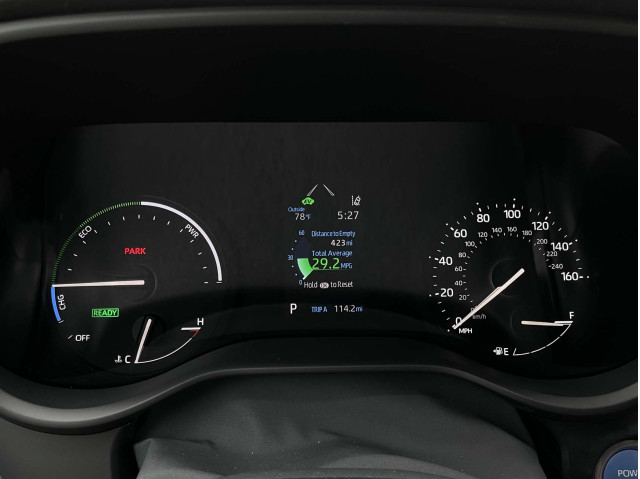 The Sienna Woodland doesn’t get its own EPA fuel economy ratings, and retains the AWD Sienna’s ratings of 35 mpg city, 36 highway, and 35 combined. In the real world the Sienna Woodland fell a bit short. Over 114 miles of mixed suburban driving, I saw an average of 29.2 mpg, according to the onboard trip computer. It improved to 33.4 mpg over the course of 502 highway miles. Few other vehicles without a plug and with seating for up to eight passengers can achieve this kind of fuel economy. Having a higher ride height doesn’t seem to affect its efficiency. 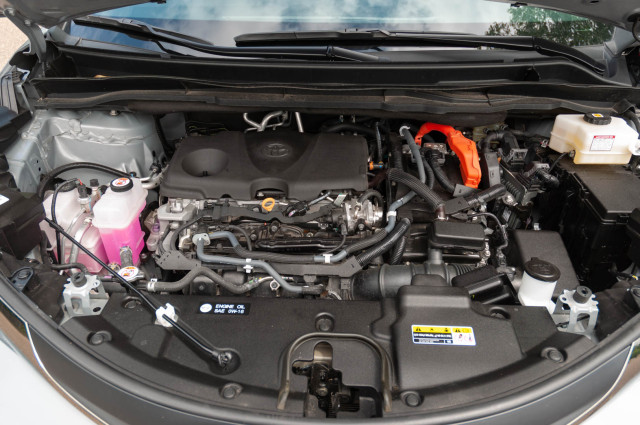 Like every 2022 Sienna, the Woodland Special Edition pairs a 2.5-liter inline-4 with an electric motor up front. A second electric motor in the rear makes for all-wheel drive. The hybrid system’s good for a total of 245 hp. It’s barely enough. From 0-30 mph the electric motor’s torque shoves it off the line quicker than other minivans. But going from 40 to 60 mph while getting onto a highway is a slow dance that requires patience, which I’m told I have very little of. Performing a passing maneuver at highway speeds requires planning due to the hybrid system’s lack of power and the electric motor’s inability to pick up the slack at speed. This minivan struggles to keep up with fast-paced traffic. 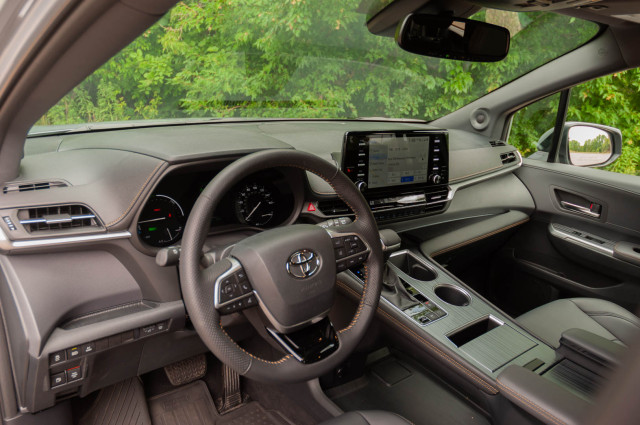 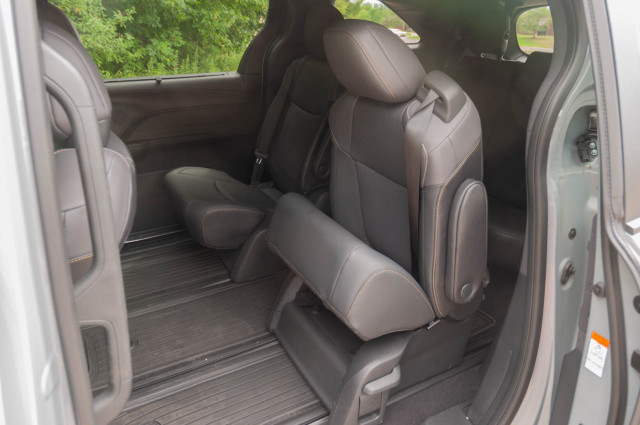 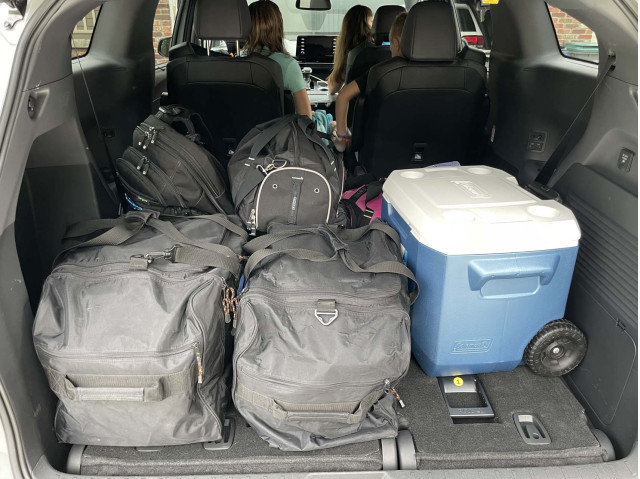 The Woodland Special Edition model comes standard with synthetic leather upholstery that looks similar to leather, but doesn’t feel like it. It’s wipeable, and the seat backs feature a textured finish that adds some pizazz to a rather boring vehicle. The full-length center front console is covered in silver plastic with a design etched into it that feels much more durable than the shiny piano black trim favored by other automakers despite how easily it scratches and smudges. The standard second-row captain’s chairs slide fore and aft, though they don’t tumble into the floor as in the Chrysler Pacifica. 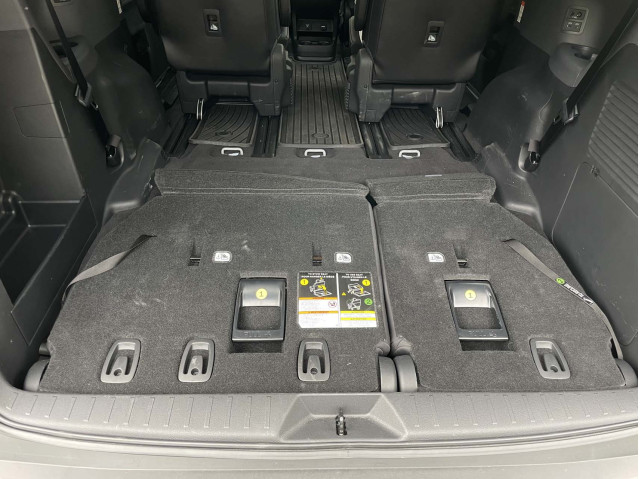 Every time I pulled into my driveway in the Sienna Woodland, there would be a loud thunk that came from the rear. It took me two days to finally figure out it was the folded third-row seat bottoming out in its well. In that position, it didn’t lock into place. That led to the third row bouncing up and down when pulling into a driveway, over a speed bump, or down a bumpy gravel road. This isn’t a Woodland Special Edition issue, it’s a Sienna issue. 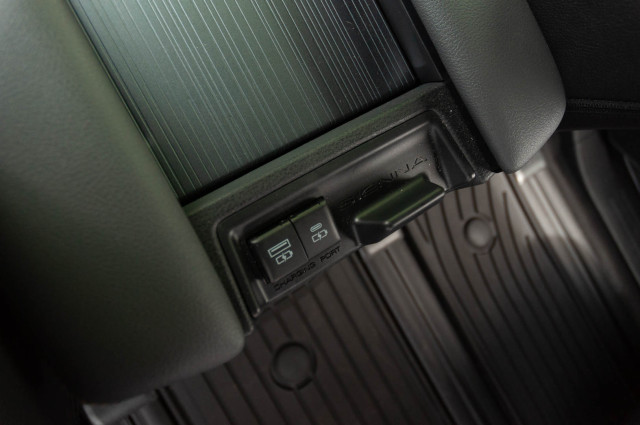 The Sienna Woodland accommodates teenage family life with all the ports. I counted a total of seven USB ports, of both USB-A and USB-C varieties. As a bonus, there are two 120-volt outlets and one 12-volt outlet, all standard. All of this can be optioned on other Siennas, but the Woodland bakes it into the package. A HDMI port dedicated to the optional $1,415 rear seat entertainment system is along for the ride as well. Bring all the cords because this thing’s ready to charge all the electronics. 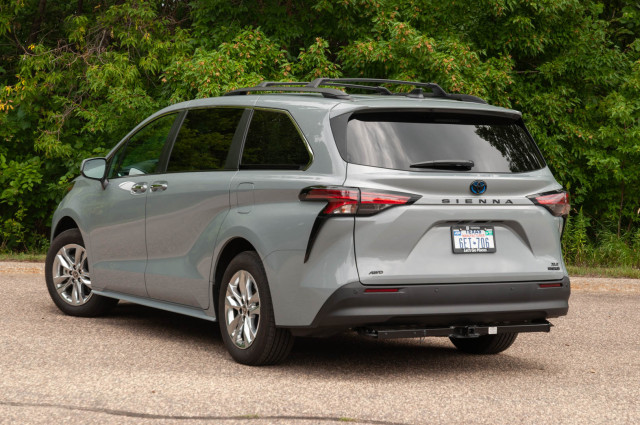 The Sienna Woodland’s ground clearance is 6.9 inches, while other Siennas sit at 6.3 inches. But Toyota neglects to mention the poorly integrated 1.25-inch tow receiver dangles down rather than being integrated into the rear end. Standard on the Woodland, the tow hitch corrects a problem on other Sienna models. Without the extra 0.6 inches of ground clearance, the receiver can scrape the ground as it bottoms out while pulling into some driveways or other inclines.

At an as-tested price of $45,350, the Sienna Woodland is essentially the same price as a similarly equipped 2023 XLE or XSE model, but without the increased ride height. The Cement color that was exclusive to the 2022 Woodland can now be ordered on other Siennas. Notably, Toyota swears the Woodland Special Edition model returns for the 2023 Sienna lineup, but it’s nowhere to be found on the consumer website or build configurator at the time of publishing.

The Sienna Woodland leans into outdoorsy marketing hype while increasing the ride height so the poorly integrated tow receiver doesn’t scrape the ground. While the Sienna stands out as an efficient family hauler that the competition can’t match, especially with all-wheel drive, the three-star driver front-impact score from the NHTSA for 2023 is troubling for a minivan.

Running for a cause on Thanksgiving

Teaching the next generation of pheasant hunters

Coyote Men fall to Air Force on the road

Jacks return to the rink

‘People are very giving and sharing’ Match Day this …

Stolen guns, what role do gun owners play in keeping …

Mapping a murder with surveillance cameras